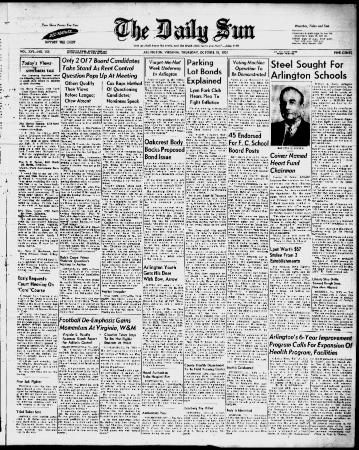 This document is a single issue from the Northern Virginia Sun. The first issue of the Sun newspaper (the original precursor to the current Sun Gazette) was published in 1935. During various periods, as ownership changed and mergers took place, the newspaper was called the Daily Sun or the Northern Virginia Sun, eventually becoming what we know today as the Sun Gazette.Through the generosity of the Friends of the Library, the Center was able to have microfilm of the newspaper from 1935-1978 digitized and made available on the library website. For online access to more recent issues of the Gazette please visit the following link to the newspaper’s website: http://www.insidenova.com