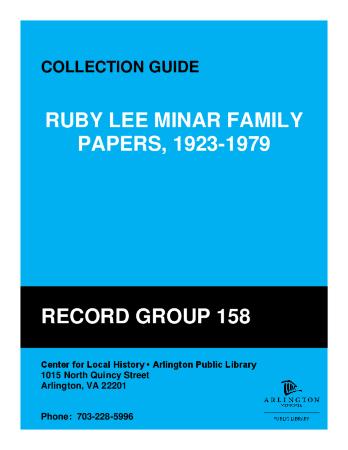 Record Group 158, measuring .63 linear feet and artifact storage, contains the personal papers of the Ruby Lee Minar family and spans 1923-1979. The bulk of the material pertains to Ruby Lee and Patricia and comes from the period of the early 1920s through the early 1950s. The collection contains handwritten and typed correspondence; 1930s holiday cards; photographs; publicity and business records for Ruby Lee Minar, Inc.; a copy of John’s death certificate; and the paperwork with official seals recording Ruby Lee’s death abroad. There is also a 1930s play bill from a production of “Private Lives” at the Barter Theater in Abingdon in Arlington County. The collection contains material in English, German, French, Danish, and Polish.

The artifacts consist of a leather purse that Patricia used during her time studying abroad based on the presence of a St. Gallen stamp found in the pocket (now in Series 2, File 9) as well as a number of printed books. The book artifacts include one in German entitled “Zue freiheit berufen!” (which translates to “Called to Freedom”), a French yearly planner, a guidebook for birds, a handbook for Chemistry and Physics, and ten books from the Ten Cent Pocket Series including a book of synonyms, one on improving vocabulary, one about Buddhist philosophy, and one of the U.S. Constitution, and ones based on works by John Stuart Mills, Nietzsche, Tolstoy, and Dante, and a compilation of Shakespearian quotations. A photocopy of the clipping found in the Tolstoy book was made during processing and left where it was originally placed.

Series 2 contains personal materials for Patricia Lee Minar. This series includes correspondence in English, French, and German and a book about Warsaw written in Polish; photographs; and academic material from her time studying abroad and at the State Teacher’s College.

Series 3 is designated for material relating to John Milton Minar and contains only a single, satirical article he wrote during his journalism career.

Series 4 consists of material from the 1920s relating to Ruby Lee Minar, Inc., including the business ledger for 1923 that records meetings and business dealings with clients. This series also contains promotional material for each of Ruby Lee’s three major developments in Arlington: Lyon Park, Lee Heights, and The Palisades, and a blank sales agreement for Greenway Downs in Fairfax County